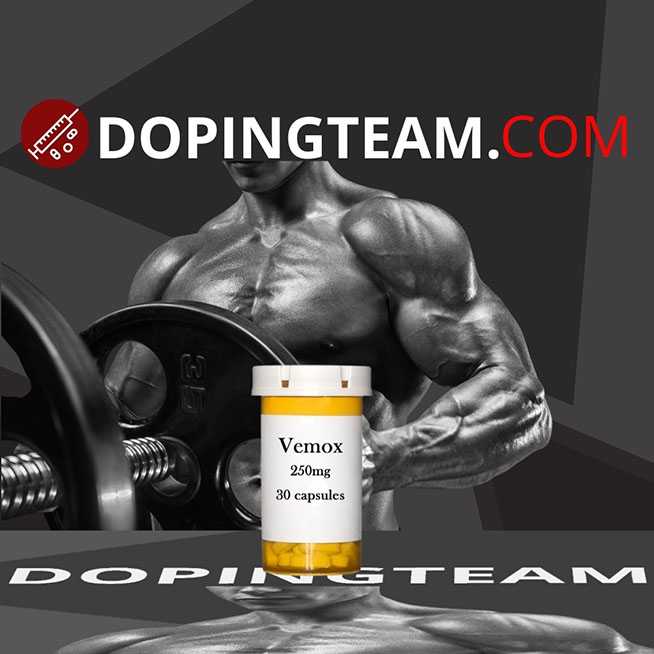 Form of release of the medicinal product. Capsules.

Action of the medicine . Pharmacodynamics. Vemox 250 (Amoxicillin) is a semisynthetic bactericidal antibiotic from the penicillin group with a broad spectrum of action. It is inactivated by beta-lactamases (penicillinases), which produce some strains of bacteria. Amoxicillin is active against all strains of hemolytic streptococci (including streptococci of groups A and B), pneumococci and enterococci, corynebacteria, listeria, Erysipelothrix insidiosa, sibirica bacilli, as well as actinomycetes, some clostridia, staphylococci that do not produce beta-lactamase. From gram-negative bacteria to amoxicillin, gonococci, meningococci and salmonellae are sensitive, hemophilic bacteria, bordetics, E. coli, shigella, some species of Proteus, Klebsiella, Enterobacter, Citrobacter, Acinetobacter, Serratia marcescens and Providencia are less sensitive. The drug is also sensitive to brucel, Leptospira and treponema. From the number of anaerobic microorganisms, most of the gram-positive and gram-negative bacteria are sensitive, with the exception of Bacteroides fragilis.

Pharmacokinetics. Vemox 250 does not dissolve in the acidic environment of the stomach, it is quickly absorbed in the digestive tract. The maximum concentration in the blood plasma is reached in 1 – 2 hours after administration. The intake of food does not significantly affect the absorption of the drug. Amoxicillin penetrates well into most tissues and body fluids. It is excreted in considerable quantities together with bile, however the most part of the drug is excreted unchanged in urine. Amoxicillin passes through the placental barrier and enters the breast milk. The biological half-life is approximately 1 hour, with anuria it increases to 5 – 20 hours.

Vemox 250 is used to treat infectious diseases caused by microorganisms that are sensitive to the drug, especially infections of the ENT organs, respiratory tract, urogenital system, bile ducts, etc. Amoxicillin is the first choice antibiotic at any age in acute bronchitis, acute bronchiolitis, pneumonia, acute epiglotitis, otitis media, acute sinusitis and as part of peptic ulcer therapy. In acute complications of chronic bronchitis, amoxicillin is prescribed, first of all, with pneumococcal infection. In case of justified sensitivity of the pathogen, amoxicillin is used to treat urogenital infections, acute gonorrhea. Within the framework of complex therapy, the drug is used to treat typhoid fever or paratyphoid, and to sanitize carriers of salmonella.

Method of use and dose Vemox 250

Doses are administered individually, depending on the severity of the disease and the sensitivity of the causative agent of the infection. Adults, as a rule, appoint 0, 5 – 1 g amoxicillin every 8 hours, that is, 1,5 – 3 g per day. In acute gonorrhea appoint a single 3 g.

The daily dose for children is mostly 30 – 60 mg / kg of body weight and is divided into three doses every 8 hours. If necessary, the dose can be increased 2 times. Antibiotic treatment is continued for 48 to 72 hours after the disappearance of signs of the disease, and with exacerbation of chronic bronchitis – only during the withdrawal of purulent expectoration. In infections caused by beta-hemolytic streptococcus, amoxicillin is taken for at least 10 days. Patients after hemodialysis need to replenish the lost amount of the drug. It is very important to carefully follow the dosage prescribed by the doctor, and do not stop treatment before the indicated time.

During treatment, allergic reactions may occur, for example, exanthema, urticaria, pruritus, in isolated cases – Stevens-Johnson syndrome, Lyell syndrome, as well as anaphylactic reactions. There may be such violations of the digestive tract as nausea, vomiting, diarrhea. Almost 70% of patients with infectious mononucleosis for the most part on the 5th day of treatment receive a morbiiform or rubioformiform rash that is not associated with allergic reactions.

In severe overdose, neuromuscular symptoms (convulsions, ECG changes, hypertonia) are manifested. Therapy is symptomatic, extraction from the blood is possible with the help of hemodialysis.

When allergic reactions occur, it is necessary to stop further treatment with amoxicillin. Such adverse reactions, like nausea, vomiting, diarrhea, mostly do not require the suspension of treatment and after the termination of the course spontaneously disappear.

Interaction with other drugs

With simultaneous administration with bacteriostatic antibiotics (tetracyclines, chloramphenicol, erythromycin, etc.), mutual antagonism arises. On the contrary, amoxicillin with aminoglycoside antibiotics has a synergistic antimicrobial effect. With the joint administration of allopurinol, there is an increase in the incidence of allergic skin reactions. Simultaneous administration of probenecid leads to a delay in the release of amoxicillin. Vemox 250 reduces the effect of steroid contraceptives and has cross-sensitization with other penicillins and cephalosporins.

Conditions and periods of storage