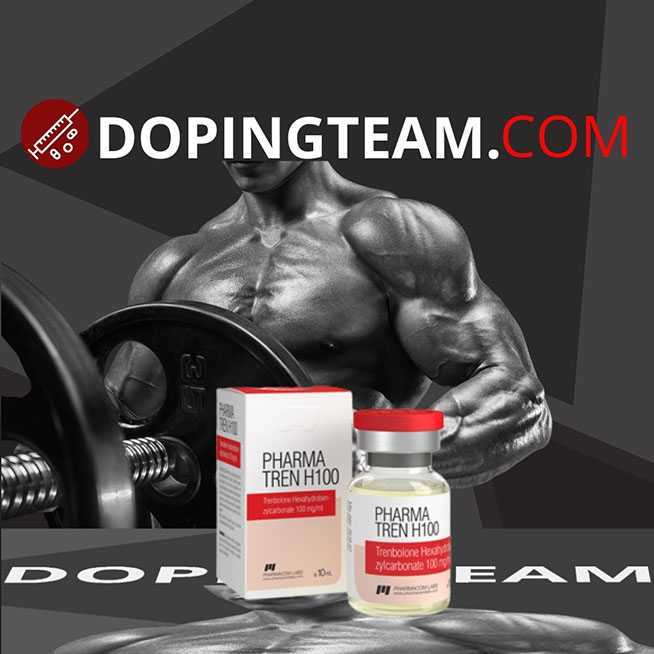 Pharma Tren H100 is a strong, androgenic steroid which also has a high anabolic effect. Whether a novice, hard gainer, power lifter, or pro bodybuilder, everyone who uses Pharma Tren H100 is enthusiastic about the results: a fast gain in solid, high-quality muscle mass accompanied by a considerable strength increase in the basic exercises. in addition, the regular application over a number of weeks results in a well visible increased muscle hardness over the entire body without dieting at the same time. Frequently the following scenario takes place: bodybuilders who use steroids and for some time have been stagnate in their development suddenly make new progress with Pharma Tren H100. Another characteristic is that Pharma Tren H100, unlike most highly-androgenic steroids, does not aromatize. The substance trenbolone does not convert into estrogens so that the athlete does not have to fight a higher estrogen level or feminization symptoms. Those who use Pharma Tren H100 will also notice that there is no water retention in the tissue. To say it very clearly: Parabolan is the number one competition steroid. When a low fat content has been achieved by a low calorie diet, Pharma Tren H100 gives a dramatic increase in muscle hardness. In combination with a protein rich diet it becomes espe-cially effective in this phase since Pharma Tren H100 speeds up the metabolism and accelerates the burning of fat. The high androgenic effect prevents a possible overtraining syndrome, accelerates the regeneration, and gives the muscles a full, vascular appearance but, at the same time, a ripped and shredded look. Most athletes inject Pharma Tren H100 at least twice a week; some bodybuilders inject 1-2 ampules per day during the last three to four weeks be-fore a competition. Normally a dosage of 228 mg/week is used, corresponding to a weekly amount of three ampules. It is our experience that good results can be achieved by injecting a 76 mg ampule every 2-3 days. Pharma Tren H100 combined with Winstrol Depot works especially well and gives the athlete a distinct gain in solid and high quality muscles together with an enormous strength gain. A very effective stack is 76 mg Pharma Tren H100 every 2 days combined with 50 mg Winstrol every 2 days. Athletes who are interested in a fast mass gain often also use 30 mg Dianabol/day while those who are more interested in quality and strength like to add 25 mg+ Oxandrolone/ day. Probably the most effective Pharma Tren H100 combination consists of 228 mg Parabolan/week, 200 mg Winstrol Depot/week, and 40-50 mg Oral-Turinabol/day and usually results in a drastic gain in high quality muscle mass together with a gigantic strength gain. Parabolan also seems to bring extraordinarily good results when used in combination with growth hormones. Parabolan is not a steroid suitable for year-round treatment since it is quite toxic. The duration of intake should be limited to a maxi-mum of 8 weeks. It has been proven that Parabolan, above all, puts stress on the kidneys, rather than the liver. Athletes who have taken it in high dosages over several weeks often report an unusually dark colored urine. In extreme cases blood can be excreted through the urine, a clear sign of kidney damage. Those who use Pharma Tren H100 should drink an additional gallon of fluid daily since it helps flush the kidneys. Since Parabolan does not cause water and salt retention the blood pressure rarely rises. Similar to Finaject, many athletes show an aggressive attitude which is attributed to the distinct androgenic effect. It is interesting that acne and hair loss only occur rarely which might be due to the fact that the substance is not converted into dihydrotestosterone (DHT). Some athletes report nausea, headaches, and loss of appetite when they inject more than one ampule (76 mg) per week. Since Pharma Tren H100 considerably reduces the endogenic testosterone production, the use of testosterone-stimu-lating compounds at the end of intake is suggested. In older athletes there is an increased risk that Parabolan could induce growth of the male prostate gland. We recommend that male bodybuilders, during and after a treatment with Pharma Tren H100, have their physician check their prostate to be sure it is still small in size.

You can get rapid effect in workouts after buying Pharma Tren H100 by credit card or via Paypal.

Enjoy buying Pharma Tren H100 from our steroid store. We are looking forward to make you our loyal customer.