Written by Steroids Online on 29.01.2018. Posted in Category Blog, Trainers 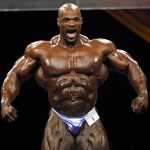 Ronnie Coleman – 8-fold Mr. Olympia and one of the most powerful athletes in the history of bodybuilding. Coleman’s uniqueness lies in the fact that unlike other multiple champions of Olympia, he won his first statue of Sandov not at once, but only after years of struggle for the championship title. And then he managed to become the best eight times in a row, which in general goes beyond all the historical records in this tournament. The same result was achieved only by Lee Haney.

At his first victorious Olympia in 1998, Ronnie looked phenomenal, it was truly a breakthrough of the year, the best achievement in the bodybuilding world of those years. But what caused such an impressive transformation of the athlete, which many initially did not take seriously as a real competitor for the title of Mr. Olympia? Ronnie Coleman found the key to his physiology, by trial and error he groped for that training system that operated on him incredibly effectively. And only then, from year to year, he trained precisely according to this scheme, practically unchanged, becoming more and more. When, before the next tournament, Mr. Olympia, journalists asked him about the changes in the training mode, Ronnie replied that he had not changed anything, why change what is working?

The road to the summit began in 1992, when Ronnie Coleman first appeared at the main competition in professional bodybuilding. Then, the future king of bodybuilding impressed few, and appeared not even in the top ten, taking a place below the 15th. Certainly, it cannot be called a loud start, nor his brightest appearance, there was no question. But Ronnie did not embarrass, he continued training and continued searching for the right system. In 1993, Coleman missed Olympia, realizing that he was not ready for a full fight for the title. The competitions of 1994-95 did not bring the expected results either, Coleman came in only 15th and 11th place. The first impressionable results were noticeable at Olympia 96, when Ronnie suddenly breaks into the ranks and is in the top six, performing in the finals and finishing 6th. In 1997, Ronnie “slips out” a bit, taking 9th place in the ranking of the world’s strongest athletes. And here in this period of time, between 1997 and 1998, in the career of Coleman there are significant changes. His triumphal procession begins with the Grand Prix of Russia 97, where in the finals he defeated Kevin Levron, who had always beat him before. Then Coleman wins a professional tournament in Toronto, the tournament “The Night of Champions 98”, while significantly improving his shape and becoming more and more muscular. When he appeared on Olympia 98, it was already quite another Ronnie Coleman. His unreal appearance shook the fans and judges, and won the first title, Mr. Olympia in his career. And everything else is history.

So, which system worked for Coleman 100%? Periodization of training, alternation of strength training and pumping with a large number of approaches and repetitions. Although many Methodists called the Coleman system a completely new type of training, rather than a simple periodization. Ronnie himself later recalled that when he began training, he was a pure security official, he always trained exclusively for strength, with big weights, regularly performing three powerlift exercises: bench press on a horizontal bench, sit-ups and stall. And he continued to do powerlifting via the new scheme, as he is convinced that it has an excellent influence on the growth of the total mass of muscles. Then, over time, Ronnie decided to add exercises with light weights to his power complex and immediately began to notice the new progress in the growth of muscle mass. When Coleman fully applied this method during the period 1997-98, his muscles literally “exploded”, in just one year he achieved surprising progress, which he would have taken many years before.

Of course, Ronnie Coleman’s program is created for advanced athletes, whose muscle growth potential is already thoroughly exhausted from the usual methods. But, at the same time, anyone can follow his training program, since it is not necessary to perform such a large number of sets.

In the power exercises, you can perform 3 sets and 4-6 repetitions in each. In the pumping period, instead of five, do four sets with the same exercises in Ronnie Coleman’s training program. The power and pumping periods, divided into 3-9 weeks – this is the most optimal option, since such a small start point allows you to consider factors such as genetics, training experience, the ability to recover after heavy loads, life stresses, etc. A too short period of light training is also not worth it, it plays an important role in recovery and rest for ligaments and joints, as well as for the development of muscle fibers reacting to pumping, but all of the serious work to build strength and mass is carried out in the power section of the program. When it comes to training with large weights in exercises, the body is an indicator of when it’s time to work with heavy weights,

The training program of Coleman for the majority of people

Ronnie Coleman’s training programme may be too frequent for most people in terms of training days. This is because, for progress to be made, it is necessary to spend the remaining days resting to restore adequately.

But some of the nuances can be noted and applied in other schemes, and most importantly, it is the principle of periodizing the loads with a division into “hard” and “light” days, when the muscles are constantly experiencing positive stress and reacting to training with qualitative growth.

Coleman has been extremely open about his steroid use during his time competing in Mr.Olympia, since back then, it was all done legally through a doctor with a prescription. He obviously used multiple types of testosterone for his stacked cycles, we know he’s used Testosterone Enanthate for bodybuilding in the past. But, in recent years, his favored testosterone of choice would be Sustanon (a 4-ester testosterone mix) since a single-estered Test just wouldn’t cut it. Learn more about Sustanon 250 cycle benefits here.

For a bulking cycle, he would also run 1-2 oral steroids in the cycle such as Methandienone (Dianabol) and Oxymetholone (Anadrol) for extra mass. Additionally, he might add another wet bulking steroid like Nandrolone Decanoate (Deca Durabolin) or Boldenone Undecylenate (Equipoise). At the same time, he would always run a dose of growth hormone (HGH) during his cycles for added protection.

His bulking cycle would have looked something like this:

For cutting down the water weight and fat ready for a competition, Ronnie would have used a cutting steroid like Trenbolone along with his HGH and Sustanon. Additionally, the only oral capable of sucking the water out of the body to provide such a ripped look like Ronnie’s is Stanozolol (Winstrol). Learn more about how to use Winstrol here.

Coleman’s cutting cycle would have looked something like this:

The steroid cycle of Coleman for the majority of people

Ronnie Coleman’s steroid cycles are similar in style to his training program and are also aimed at creating explosive muscle growth and definition for professional bodybuilders. Using a combination of injectable steroids, oral steroids, and growth hormone, will likewise put the body under positive stress to provide a stable increase in qualitive growth.