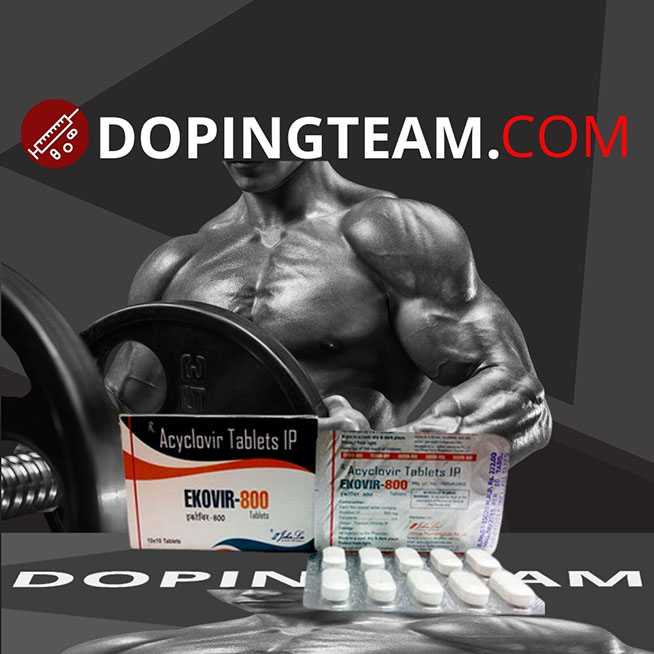 Antiviral agents for systemic use.

Tablets should be taken after meals with plenty of fluids.

Treatment of infection caused by the virus Herpes zoster (shingles)

In patients older than 65 years, renal failure is more common than in the younger age group. Therefore, this age group during the treatment of Ekovir 800 must regulate the use of fluid. Patients with chronic renal failure should be prescribed lower doses of acyclovir.

From the side of the lymphatic system and the blood system: very rarely anemia, leukopenia, thrombocytopenia.

Mental disturbances Infrequently: insomnia. Very rarely depersonalization and / or derealization (occurs after the drug is discontinued). Transient psychosis, especially after administration of acyclovir in the progression of the disease.

From the side of the nervous system Often: neurological manifestations, incl. dizziness, drowsiness, anxiety, hallucinations. These adverse reactions are more common in patients with renal insufficiency and disappear after discontinuation of the drug. Infrequently: headache, exhaustion. Temporary convulsive seizures, especially after administration of acyclovir in the progression of the disease. Also a loss of consciousness, and perhaps a coma.

From the side of the digestive tract Often: abdominal pain, nausea, diarrhea, vomiting.

In cases of overdose, the necessary measures to remove the drug (hemodialysis).

USE DURING PREGNANCY OR LACTATION

For children under 2 years of age, this form of the drug is not used.

In patients older than 65 years, renal failure is more common than in the younger age group. Therefore, this age group during the treatment of Ekovir 800 requires ongoing monitoring of kidney function and regulate fluid intake. If necessary, the dose is adjusted.

There are no data on the effect of the reaction rate when driving or working with other mechanisms.

INTERACTION EKOVUR 800 WITH OTHER DRUGS AND OTHER INTERACTIONS

Pharmacodynamics. Acyclovir is a pharmacological inactive substance that is transformed into an antiviral agent only after penetration into cells infected with the Herpes simplex virus (herpes simplex), Varicella-zoster (shingles). Activation of acyclovir occurs due to the catalytic action of thymidine kinase viruses, an enzyme that is required for viral replication. This process occurs in 4 phases: the introduction of acyclovir into cells infected with herpes viruses; phosphorylation of acyclovir in acyclovir-monophosphate with the participation of thymidine kinase enzyme contained in virus-infected cells; transformation under the influence of cellular enzymes acyclovir-monophosphate in acyclovir-triphosphate, which exhibits antiviral activity; the relationship of acyclovir-triphosphate with viral DNA polymerase is 10 to 30 times higher, than cellular polymerase, and provides a selective suppression of the activity of the enzyme of the viral polymerase, leads to inhibition of the synthesis of viral DNA and, accordingly, to inhibition of viral replication. With herpes, prevents the formation of new elements of the rash, reduces the likelihood of skin dissemination and visceral complications, accelerates the formation of the crust. Reduces pain in the acute phase of herpes zoster. It has an immunostimulating effect.

After oral administration, acyclovir is partially absorbed into the intestine. Concentration after oral administration per day 800 mg – 8.16 ± 1.98 mmol / l, Peak maximum concentration is achieved in 1.5-2 hours. Penetrates through the BBB and placental barrier, excreted in breast milk. It penetrates well into organs and tissues, the concentration in the cerebrospinal fluid is 50% of the blood level. After oral intake of 1 g per day, the concentration in breast milk is 60-410% of its concentration in plasma (in the body of a child with breast milk, acyclovir is in a dose of 0.3 μg / kg per day). The connection with plasma proteins is 9-33%. Metabolised in the liver to form a metabolite 9-carboxymethylguanine. is excreted by the kidneys in unchanged form by glomerular and tubular secretion, in the form of a metabolite – 10-15%. The rate of excretion slows down with age, and the half-life of the active substance is increased. In patients with severe renal insufficiency, the half-life is 20 hours, with hemodialysis -5-7 hours (the concentration of acyclovir in the plasma decreases to 60% of the initial value).

white round, biconvex tablets with the impression “VS 3”.

5 years. Do not use after the expiration date.

Store at a temperature of no higher than 25 ° C in the original packaging.

Keep out of the reach of children.