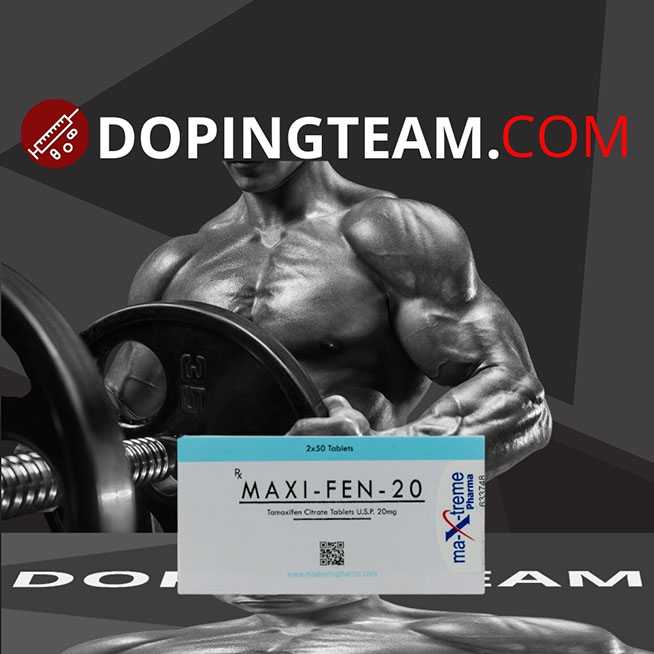 Maxi-Fen-20 (Tamoxifen) is a non-steroidal antiestrogenic agent that also has weak estrogenic properties. Its action is based on the ability to block estrogen receptors. Tamoxifen, as well as some of its metabolites, compete with estradiol for binding sites to the cytoplasmic estrogen receptors in the tissues of the mammary gland, uterus, vagina, anterior pituitary gland and tumors with a high estrogen receptor content. In contrast to the receptor complex of estrogen, the receptor complex of tamoxifen does not stimulate the synthesis of DNA in the nucleus, but inhibits cell division, which leads to regression of tumor cells and their death.

Metabolized in the liver with the formation of several metabolites. Removal of Maxi-Fen-20 from the body has a two-phase character with an initial T1 / 2 of 7 to 14 hours and followed by a slow terminal T1 / 2 for 7 days. It is allocated mainly in the form of conjugates, mainly with fecal masses and only small amounts are excreted in the urine.

Indications for use of Maxi-Fen-20

The dosage regimen is usually set individually, depending on the indications. The daily dose is 20-40 mg. As a standard dose, taking 20 mg of tamoxifen inside daily for a long time is recommended. When there are signs of progression of the disease, taking the drug is canceled.

Tablets should be taken without chewing, squeezed with a small amount of liquid, in 1 morning or, dividing the required dose into 2 doses, in the morning and in the evening.

At the beginning of treatment, local exacerbation of the disease is possible – an increase in the size of soft tissue formations, sometimes accompanied by a pronounced erythema of the affected areas and adjacent areas – which usually occurs within 2 weeks.

The likelihood of thrombophlebitis and thromboembolism may increase.

Sometimes transient leukopenia and thrombocytopenia can occur, as well as an increase in the level of hepatic enzymes, very rarely accompanied by more severe impairment of liver function, such as fatty liver infiltration, cholestasis and hepatitis.

In some patients with bone metastases, gipekalcia was observed at the beginning of the treatment.

Maxi-Fen-20 causes amenorrhea or irregularity of menstrual periods in premenopausal women, as well as reversible development of ovarian cystic tumors.

With long-term treatment with tamoxifen, changes in the endometrium, including hyperplasia, polyps, and in some cases – endometrial cancer, as well as the development of uterine fibroids, can be observed.

Contraindications to the use of Maxi-Fen-20

Use of Maxi-Fen-20 in pregnancy and lactation

Application for violations of kidney function

Impact on the ability to drive vehicles and manage mechanisms

During the treatment period, it is necessary to refrain from engaging in potentially dangerous activities that require a high concentration of attention and speed of psychomotor reactions.

Acute overdose of tamoxifen in humans was not observed. It should be expected that an overdose can cause an increase in the above-described adverse reactions.

Specific antidotes do not exist, treatment should be symptomatic.

With the simultaneous administration of tamoxifen and cytostatics, the risk of thrombosis increases.

Antacids, H2-histamine receptor blockers and other drugs of similar effect, increasing the pH value in the stomach, can cause premature dissolution and loss of protective effect of the enteric-soluble tablet. The interval between taking tamoxifen and these drugs should be 1-2 hours.

There are reports of increased tamoxifen anticoagulant effect of coumarin drugs (eg, warfarin).

Drugs that reduce the excretion of calcium (eg, thiazide diuretics) may increase the risk of hypercalcemia.

The combined use of tamoxifen and tegafur can promote the development of active chronic hepatitis to cirrhosis of the liver.

The simultaneous use of tamoxifen with other hormonal drugs (especially estrogen-containing contraceptives) leads to a weakening of the specific effects of both drugs.

Conditions of leave from pharmacies

The drug is released by prescription.