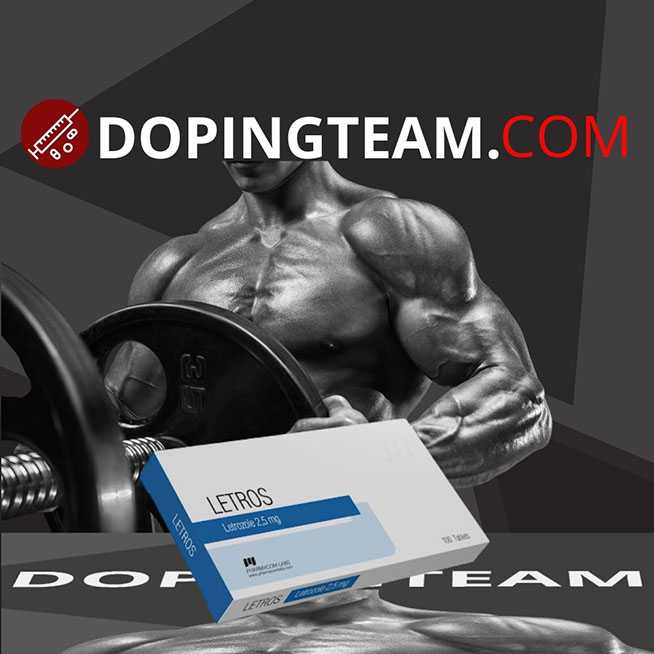 Tablets of orange color, square shape, compact and homogeneous structure, with a risk and engraving “BP” on one side,  with a facet and rounded edges. Marble is allowed on the surface of the tablets.

Letros 2.5, like its active active substance letrozole, is considered a relatively new drug by the standards of the pharmaceutical market. The appearance of most of today’s aromatase inhibitors dates back to the late 80’s – early 90’s of the 20th century. It is important that all substances of this class were originally developed for medicinal purposes, therefore they are considered safe for humans.

Customer reviews confirm this by describing Letros as an effective drug in terms of price / quality ratio. It is in the shortest time (after the first dose), it suppresses estrogens, preventing the appearance of side effects due to them. But many anti-estrogenic drugs are prohibited in sports (WADA is on the list of banned drugs), so their unauthorized use is associated with the risk of detection and disqualification. In addition, the spread of heavy aromatase inhibitors is carried out under strict control (in pharmacies are released only on prescription of a doctor).

Letros 2.5 has an active active substance letrozole. Structurally, this is a chemical derivative of benzhydrin triazole originally synthesized for drug use. Letrozole refers to the third, last generation of inhibitors (otherwise blockers or blockers) of aromatase, along with anastrozole and vorosol. Nowadays, it is effectively used in both traditional and sports medicine: in the first area, it is prescribed mainly for the treatment of tumor diseases, in the second, it is used primarily to eliminate the side effect of doping.

Letros acts as a nonspecific competitive aromatase inhibitor: it prevents the conversion of male sex hormones, androgens, into female hormones, estrogens, skeletal muscle, adipose tissue and liver. According to the data obtained during the study of letrozole, the drug is able to reduce the concentration of estradiol, estrone and estrone sulfate by 75-95% of the baseline (without visible effect on the production of tiroid or corticosteroids in the body).

It is important to understand that Letros (letrozole) is an aromatase inhibitor, not a testosterone booster: it does not directly increase the concentration of the hormone, but if it increases, it indirectly (affects by feedback when the suppression of estrogens, female sex hormones, leads to a booster of androgens, – male sex hormones). This drug is significantly different from the products of tamoxifen and clomiphene (also common in sports antiestrogens, which in action are estrogen receptor blockers that increase testosterone).

Can Letros 2.5 itself cause side effects? If the recommendations are observed, this is unlikely, but the possibility of developing disorders with respect to the digestive, urinary, cardiovascular or musculoskeletal systems can not be completely ruled out: in single cases problems such as nausea, vomiting, dry mouth, increased urination, high blood pressure, heart beat, bone pain and some others.

Letrozole, as a medicinal product, was approved by the FDA (Food and Drug Administration) for human use, so it is considered relatively harmless: typical violations are primarily manifested with prolonged abuse / individual predisposition.

METHOD OF USE AND DOSES OF LETROS 2.5

With disseminated forms of breast cancer in postmenopausal women (adults and the elderly), the recommended dose of letrozole is 2.5 mg once daily, daily. Treatment with the drug is continued until signs of disease progression appear.

In elderly patients, dose adjustment is not required.

In patients with liver or kidney disease (with creatinine clearance greater than or equal to 10 ml / min), dose adjustment is not required.

Children do not use the drug.