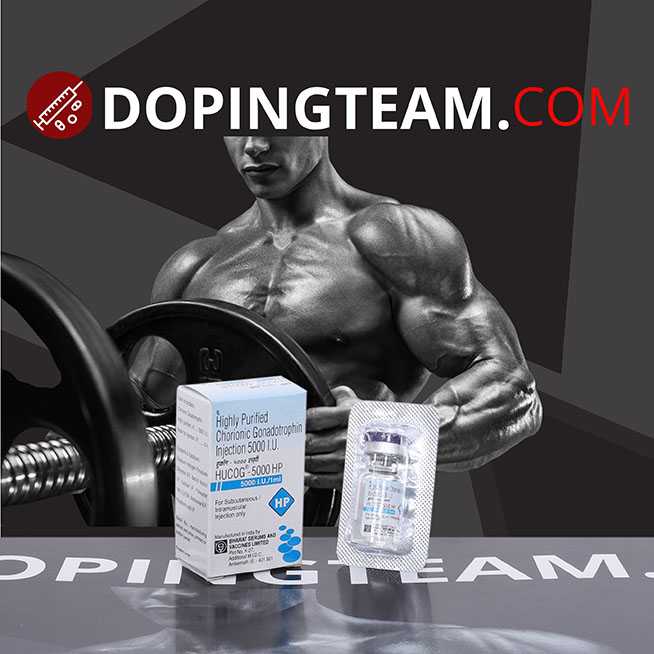 HCG 5000IU is an post cycle steroid and is made by Bharat Serums. The active substance is Human Chorionic Gonadotropin.
HCG, is not an anabolic/androgenic steroid but a natural protein hormone which develops in the placenta of a pregnant woman. HCG 5000IU is formed in the placenta immediately after nidation. It has luteinizing characteristics since it is quite similar to the luteinizing hormone LH in the anterior pituitary gland. During the first 6-8 weeks of a pregnancy the formed HCG allows for continued production of estrogens and gestagens in the yellow bodies (corpi luteum). Later on, the placenta itself produces these two hormones. HCG 5000IU is manufactured from the urine of pregnant women since it is excreted in unchanged form from the blood via the womans urine, passing through the kidneys. The commercially available HCG is sold as a dry substance and can be used both in men and women. In women injectable HCG 5000IU allows for owlation since it influences the last stages of the development of the ovum, thus stimulating ovulation. It also helps produce estrogens and yellow bodies.

Human Chorionic Gonadotropin (HCG) is a hormone produced in the placenta of the female body during the early months of pregnancy. It is in fact the pregnancy indicator looked at by the over the counter pregnancy test kits, as due to its origin it is not found in the body at any other time. Medically, human chorionic gonadotropin has been used for the treatment of undescended testicles in young males, hypogonadism (underproduction of testosterone) and as a fertility drug used to aid in inducing ovulation in women. In veterinary practices, it can also be used to rapidly induce ovulation, most often in cows and horses.

For male steroid users, HCG 5000IU can mimic the action of luteinizing hormone (LH) in the body. Luteinizing hormone is a pituitary hormone that is released and signals the manufacture of testosterone in the testicles. It is this ability that enables the compound to help restore the normal function of the testes to respond to endogenous luteinizing hormone. This ability can be dramatically reduced after a long period of inactivity, as is the case when administering anabolic steroids. Even when the release of endogenous LH has been resumed to it’s normal levels, testosterone levels may not return to normal because of the extended time of inaction that the testes were exposed to.

Individuals will also often use HCG 5000IU to combat testicular atrophy, a result of the hypothalamus pituitary testes axis shut down. While this atrophy is more of a symptom of a side effect of anabolic steroid use rather than something that can be dangerous to a user, many individuals are concerned about testicular atrophy and turn to human chorionic gonadotropin to help and alleviate it. For this purpose, HCG 5000IU is quite effective.

As is fairly obvious by the preceding, human chorionic gonadotropin offers female athletes no performance enhancing qualities and is useless for this purpose.

HOW DOES IT WORKS?

Most athletes, however, use HCG 5000IU at the end of a treatment in order to avoid a “crash,” that is, to achieve the best possible transition into “natural training.” A precondition, however, is that the steroid intake or dosage be reduced slowly and evenly before taking HCG. Although HCG 5000IU causes a quick and significant increase of the endogenic plasmatestosterone level, unfortunately it is not a perfect remedy to prevent the loss of strength and mass at the end of a steroid treatment. The athlete will only experience a delayed re-adjustment, as has often been observed. Although HCG does stimulate endogenous testosterone production, it does not help in reestablishing the normal hypothalamic/pituitary testicular axis. The hypothalamus and pituitary are still in a refractory state after prolonged steroidusage, and remain this way while HCG 5000IU is being used, because the endogenous testosterone produced as a result of the exogenous HCG represses the endogenous LH production. Once the HCG 5000IU is discontinued, the athlete must still go through a re-adjustment period. This is merely delayed by the HCG use. For this reason experienced athletes often take Clomid and Clenbuterol following HCG 5000IU intake or they immediately begin another steroid treatment. Some take HCG merely to get off the “steroids” for at least two to three weeks.

Many bodybuilders, unfortunately, are still of the opinion that HCG 5000IU helps them become harder while preparing for a competition by breaking down subcutaneous fat so that indentations and vascularity are better exposed. The HCG package insert states clearly that HCG has no known effect of fat mobilization, appetite or sense of hunger, or body fat distribution. HCG 5000IU has not been demonstrated to be effective adjunctive therapy in the treatment of obesity, it does not increase fat losses beyond that resulting from caloric restriction.

Athlete should inject one HCG 5000IU every 5 days. Since the testosterone level, as explained, remains considerably elevated for several days, it is unnecessary to inject HCG more than once every 5 days. The relative dose is at the discretion of the athlete and should be determined based on the duration of his previous steroid intake and on the strength of the various steroid compounds. Athletes who take steroids for more than three months and athletes who use primarily the highly androgenic steroids such as Anadrol, Sustanon, Dianabol (D-bol), etc. should take a relatively high dosage. The effective dosage for athletes is usually 2000-5000 I.U. per injection and should as already mentioned be injected every 5 days. HCG 5000IU should only be taken for a 4 weeks maximum.

If HCG is taken by male athletes over many weeks and in high dosages, it is possible that the testes will respond poorly to a later HCG intake and a release of the body own LH. This could result in a permanent inadequate gonadal function. Cycles on the HCG 5000IU should be kept down to around 3 weeks at a time with an off cycle of at least a month in between. For example, one might use the HCG for 2 or 3 weeks in the middle of a cycle, and for 2 or 3 weeks at the end of a cycle. It has been speculated that the prolonged use of HCG 5000IU could permanently, repress the body own production of gonadotropins. This is why short cycles are the best way to go.