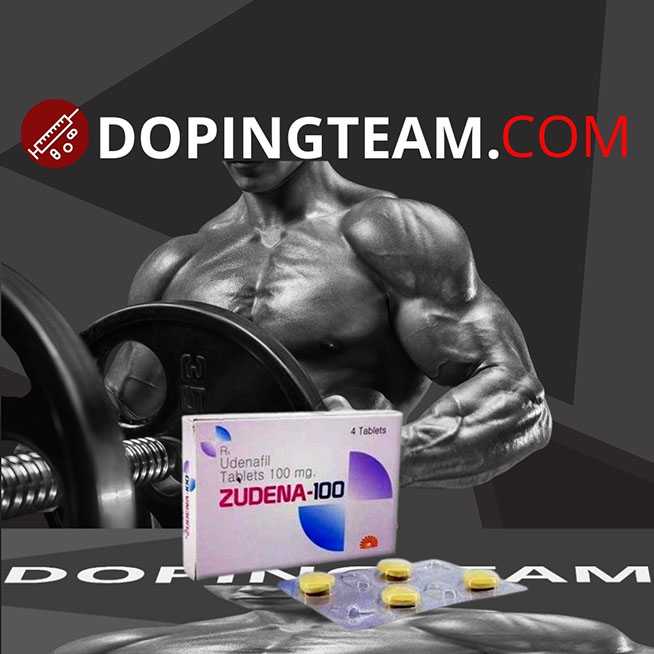 Treatment of erectile dysfunction characterized by an inability to achieve or maintain an erection penis sufficient for a satisfactory sexual intercourse.

Carefully
Caution should be taken with patients with uncontrolled hypertension (arterial pressure> 170/100 mm Hg), hypotension (arterial pressure). It should take into account the potential risk of complications in sexual activity in patients with cardiovascular diseases such as unstable angina or angina pectoris , arising during intercourse, chronic heart failure (II-IV functional class according to the NYHA classification (New York Heart Association, New York Heart Association), azvivshayasya during the last 6 months. uncontrolled heart rhythm disorders Caution should be used Zudena 100  in patients with predisposition to priapism, as well as in patients with anatomical deformation of the penis, in the presence of the implant of the penis.

The drug is taken orally, regardless of food intake. The recommended dose of the drug is 100 mg, taken 30 minutes before the alleged sexual activity.
The dose can be increased to 200 mg, taking into account the individual efficacy and tolerability of the drug.
The maximum recommended frequency of application is once a day.

Side effects of Zudena 100

From the cardiovascular system:  very often – flushes of blood to the face.

From the side of the central nervous system:  sometimes – dizziness, rigidity of neck muscles, paresthesia.

From the side of the eyes:  often reddening of the eyes; sometimes – blurred vision, pain in the eyes, increased lachrymation.

On the part of the digestive system:  often – dyspepsia, discomfort in the abdomen; sometimes – nausea, toothache, constipation, gastritis.

From the respiratory system:  often – nasal congestion; sometimes – shortness of breath, dryness in the nose.

From the musculoskeletal system:  sometimes – periarthritis.

In the process of postmarketing observations, other undesirable effects have also been described with the use of udenafil: severe palpitations, nosebleeds, tinnitus, diarrhea, allergic reactions (skin rash, erythema), prolonged erections, a feeling of general discomfort, a feeling of cold or heat, postural dizziness, cough.

At a single administration of the drug at a dose of 400 mg, adverse events were comparable to those observed with the use of uadenafil in lower doses, but were more common.
Treatment:  symptomatic. Dialysis does not accelerate the excretion of udenafil.

Zudena 100 does not have a direct relaxing effect on an isolated cavernous body, but with sexual stimulation enhances the relaxing effect of nitric oxide by inhibiting PDE-5, responsible for the disintegration of cGMP in the cavernous body. The consequence of this is the relaxation of the smooth muscles of the arteries and the flow of blood to the tissues of the penis, which causes an erection. The drug has no effect in the absence of sexual stimulation.
In vitro studies have shown that udenafil is a selective inhibitor of the PDE-5 enzyme. PDE-5 is present in the smooth muscles of the cavernous body, in the smooth muscles of the vessels of internal organs, in skeletal muscles, platelets, kidneys, lungs and the cerebellum. Udenafil is 10,000 times more potent inhibitor against PDE-5 than with PDE-1, PDE-2, PDE-3 and PDE-4, which are located in the heart, brain, blood vessels, liver and other organs. In addition, udenafil is 700 times more active in relation to PDE-5 than in relation to PDE-6, found in the retina and responsible for color perception. Zudena 100 does not inhibit PDE-11, which causes absence of cases of myalgia, low back pain and manifestations of testicular toxicity.

Zudena 100 improves the erection and the possibility of a successful sexual intercourse. The drug has an optimal duration of up to 24 hours. The effect manifests itself after 30 minutes after taking the drug in the presence of sexual arousal.
Udenafil in healthy individuals does not cause a significant change in systolic and diastolic pressure in comparison with placebo in the supine and standing position (the average maximum decrease is 1.6 / 0.8 mm Hg and 0.2 / 4.6 mm Hg ., respectively).
Udenafil does not cause changes in color recognition (blue / green), which is explained by its low affinity with PDE-6. Udenafil does not affect visual acuity, electroretinogram, intraocular pressure and pupil size.
In the study of udenafil in men, there was no clinically significant effect of the drug on the number and concentration of sperm, motility and morphology of spermatozoa.

Sexual activity has a potential risk for patients with cardiovascular disease, so treatment of erectile dysfunction, including with the use of udenafil, should not be performed in men with heart disease, in which sexual activity is not recommended.
Patients with difficulty in outflow of blood, from the left ventricle, (aortic stenosis) may be more sensitive to the action of vasodilators, including PDE inhibitors.

Despite the absence of prolonged erections (more than 4 hours) and priapism (a painful erection lasting more than 6 hours) during clinical trials, such phenomena are typical for this class of drugs. In the case of an erection lasting more than 4 hours (regardless of the presence of pain) patients should immediately seek medical help. In the absence of timely treatment, priapism can lead to irreversible damage to erectile tissue and erectile function.
Due to the lack of clinical data on the use of Zudena 100 in patients older than 71 years of this category of patients, this drug is not recommended. It is not recommended to use Zudena 100 in combination with other treatments for erectile dysfunction.

In dry, dark place at a temperature of no higher than 30 ° C.