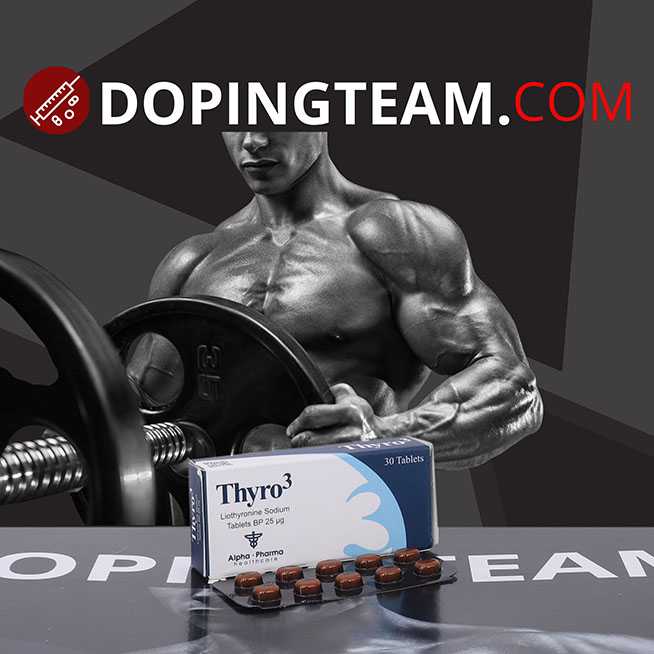 Thyro3 (Lytryronin) or T3 has found application in bodybuilding as a fat burner. Learn about the properties of the drug and how to use it.

Thyro3 is a drug made on the basis of a hormone produced by the thyroid gland. Quite often, athletes use lyoteronin to burn fat. Thanks to the additional intake of T3, its content in the blood increases, which significantly accelerates the fat burning process, and can also lead to faster growth hormone synthesis and anabolic levels.

Directly about the dosages of the drug the conversation will go a little lower, and now I want to give a couple of recommendations for individual dosage. Particular attention in this case should be paid to the instability of the drug, which leads to a decrease in its effectiveness after a certain time. It should also be noted that T3 in liquid form loses its properties even faster than the tablet form.

All doses, which will be discussed today, refer to drugs created in the US and Europe. Thyro3, produced in other regions of the world, contains substantially less active substance. For this reason, it is necessary to take only the original T3 or to achieve the desired effect will be incredibly difficult.

When using T3, there are two reception schemes with different purposes.

The first scheme for the use of lyotyronine for burning fat, involves achieving a permanent process of fat burning or maintaining the body composition. In this case, a low dosage is used, amounting to about 12.5 micrograms of the drug throughout the day.

This approach allows you not to exert a depressing effect on the thyroid gland, even if you use the drug for a long period of time. With an increase in dosage, the functions of the thyroid gland will be inhibited, but this will improve the effectiveness of T3.

It is worth noting that the depressant effect of the drug on the thyroid gland quickly passes after stopping its intake.

The second scheme allows to significantly increase the processes of fat burning in the body, while deciding to consciously suppress the activity of the thyroid gland. In this case, the dosage of Thyro3 is about 50 micrograms per day. Sometimes it is possible to take up to 75 micrograms of the drug. Such a course should be limited in duration, for example, 8-12 weeks will be enough to achieve the desired results. However, the exact date of the course is difficult to say and it should be based on the characteristics of the organism when determining it.

The drug has a short period of exposure to the body and for this reason it is desirable to use it for several meals during the day. However, for small doses, you can make an exception. So, for example, when using the first regimen, 12.5 micrograms can be safely consumed in the morning. But 50 micrograms are best divided into three steps.

It should also be noted that the drug is able to reduce the synthesis of insulin-like growth factor, which in turn leads to a decrease in the anabolic background. However, the efficiency of fat burning does not decrease. This fact led some scientists to suggest that due to the joint use of T3 and growth hormone, the risk of side effects associated with taking GH is reduced. However, in the course of further studies of the drug, it was possible to establish that lyotyronin for fat burning simply does not allow raising the levels of growth hormone to dangerous levels. At reception from 50 micrograms T3 together with a growth hormone efficiency of the last decreases.

Side Effects of Thyro3

ide effects are excluded when using the above dosages. Danger is considered a daily dose of more than 75 micrograms, and in some cases even 100 micrograms. If the dose is exceeded, then there may be a tachycardia, weakness in the muscles, a decrease in the anabolic background and an acceleration of catabolic processes.

As already mentioned above, when using certain dosages on the thyroid gland there is a depressing effect. During this period, the rate of synthesis of the natural hormone decreases. In many respects this is affected by the duration of the course of lyotyronine for burning fat. If the drug was taken a short period of time, then the thyroid gland practically does not reduce the production of the hormone. But in any case, these changes are not able to affect the endocrine system and by and large do not pose a danger, although it is necessary to warn about the possibility of a decrease in the activity of the thyroid gland.

The result of Thyro3

Of course, lithotronin is very effective, as a fat-burning agent, but it should be very neat with its dosages. If they are significantly exceeded, there may be side effects. If you follow all the recommendations, then the drug is completely safe and at the same time very effective. It can be argued that T3 is one of the most powerful fat burners.

A very important fact is its rapid deducibility from the body. And, of course, it is worth recalling once again that only the original Thyro3 should be purchased. Otherwise, the money will be wasted, due to the low quality of the large amount of the drug. Only American and European companies produce high-quality T3.

It is undesirable to purchase the drug in liquid form, since it very quickly loses its properties. The best option would be the use of tableted lyoteronin for fat burning, released in the US or Europe. Avoid funds made in third world countries. They are of poor quality and will not bring you the expected effect, delivering only disappointment.

And again about the dosages. Since Thyro3 is a very powerful fat burner, its use should be approached with all responsibility. At the same time, with all the requirements for its admission, the drug is not capable of having a negative effect on the body.

Be the first to review “Thyro3” Cancel reply