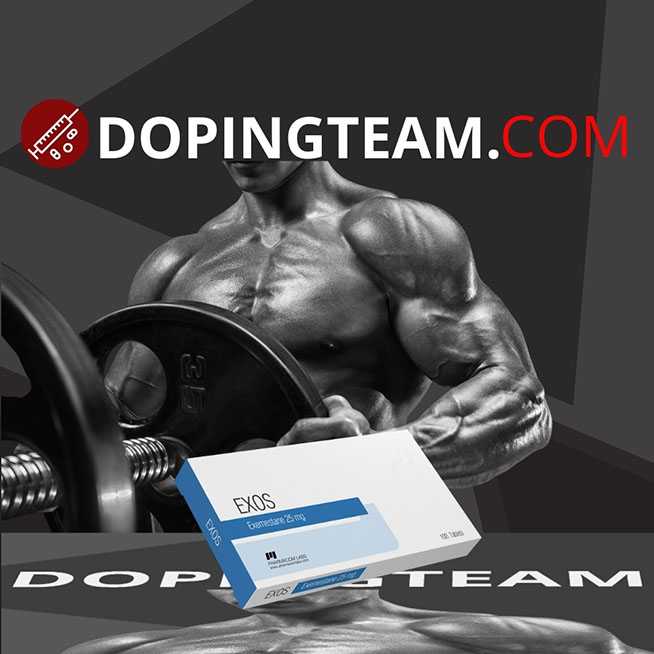 Exos 25 is a powerful anti-estrogen drug from PharmaCom Labs (China). He gets effective use in bodybuilding, and not only, with the goal of preventing estrogen-dependent side effects of sports pharmacology. Substances such as aromatizing steroids can lead to the development of estrogenic complications, the kind of water retention, increased pressure and gynecomastia in men. The action of the drug is directed to their elimination.

The exosstem has an active active substance exemestane (the chemical name is 6-methyleneandrosta-1,4-diene-3,17-dione), which by pharmacological group and action is an antiestrogen, is an aromatase inhibitor of the third generation, originally developed for drug use . Before tableting, it is available as a crystalline powder of white (or shades of white) color, soluble in alcohol, but practically insoluble in water.

The mechanism of action of Exos 25 (eczemestan) is comparable with other drugs of its category (see the products of vorozole, letrozole or anastrozole): inhibits aromatase, irreversibly binding to its active site, which blocks the formation of estrogens. But unlike them, it has a steroid origin, showing moderate androgenic activity (does not possess estrogenic or progestogenic activity). With controlled admission, it can not only reduce the concentration of estrogens, but also increase the concentration of androgens: feedback increases the levels of LH and FSH, which leads to an increase in testosterone levels. By the strength of this effect is inferior to specially developed testosterone booster.

The main action of  Exos 25 is namely antiestrogenic: it reduces the content of estradiol, estrone and estrone sulfate by 60-80% + in the blood from the initial indices, without affecting the synthesis of cortisol or aldosterone in the adrenal glands or triiodothyronine and thyroxine in the thyroid gland.

Can Exos 25 himself, whose effect is aimed at eliminating estrogen-dependent complications, have a side effect? If you follow the recommended dosage, periodicity and duration of admission, this is unlikely. But nothing guarantees no consequences for abuse: nausea, headache, insomnia, acne, sweating, fever and some others. Its active agent, although a steroid, is free from most of the typical AAS problems, such as estrogenic (from fluid retention to estrogen gynecomastia) or progestogen (from suppression of potency to progestin gynecomastia).

The use of exemestane these days is effectively carried out in both traditional and sports medicine: in the first case, mainly prescribed for the therapy / treatment of estrogen-sensitive tumors; in the second they are used mainly to prevent / eliminate estrogen-dependent side effects of sports pharmacology.

Recommended dosage for Exercise athletes does not exceed 12.5-25 mg per day (which most men will be enough to establish a stable level of estrogen and suppress negative symptoms). After ingestion, the drug is rapidly absorbed, developing Cmax in the blood for 2 hours. Take it is recommended after a meal, because the food improves absorption by 40%.

The use of Exos by athletes is justified mainly in severe courses, accompanied by a real risk of developing estrogenic complications. With light cycles or with complex cycles of non-flavored sports pharmacology, the need for it is mostly absent.

The scheme of taking Exosestan depends on the situation: it can be used from the first weeks of the course to prevent consequences (in prophylactic dosage ≈ 12.5 mg every other day) or to be connected urgently to eliminate them at the beginning, middle or end of the course (in full dosage ≈ 25 mg per day).

To apply Exos 25 (eczemestan) without any problems, it is recommended to be examined in advance, excluding existing contraindications, and to consult, having received individual instructions. Here the questions of athletes are answered by qualified consultants who are familiar with sports pharmacy.

Contraindications to the use of Exos 25, in turn, is: hypersensitivity and intolerance – for both sexes; pregnancy and lactation for women; with caution are taken – if there is a violation of kidney and liver function, in childhood and old age. Plus, the purpose of exemestane is avoided when the patient performs work that requires reaction speed and concentration, since it can cause mood swings, dizziness, fever, headache, drowsiness and general weakness.

It is important to understand that exemestane was originally developed not for sports, but for medical purposes. Like most of today’s sports medicine, it is of medical origin, therefore, if the recommendations are observed, it is considered to be relatively harmless to humans.

The feedback on the network describing Exos 25 confirms this. According to athletes, the drug is expressed and quickly establishes a stably low level of estrogens, and on the other hand, it can slightly increase the concentration of androgens. If a heavy course of aromatizing sports pharmacology does not allow the intake of the aromatase inhibitor in time, then the development of side effects, such as estrogen-dependent fluid retention and gynecomastia in men, is not excluded.

The efficacy and safety of exemestane has been confirmed in a number of laboratory and clinical studies, which for the FDA served as the basis for approving it as a medicament. However, the use of antiestrogens is strictly controlled in sports, because many of them are equated with WADA to prohibited doping.

Side effects of Exos 25:

In general, the portability of EXOS is good; The undesirable effects when using the drug at a dose of 12.5 mg are minor or moderately severe.
From the gastrointestinal tract: very often – nausea; often – anorexia, abdominal pain, vomiting, constipation, dyspepsia, diarrhea.