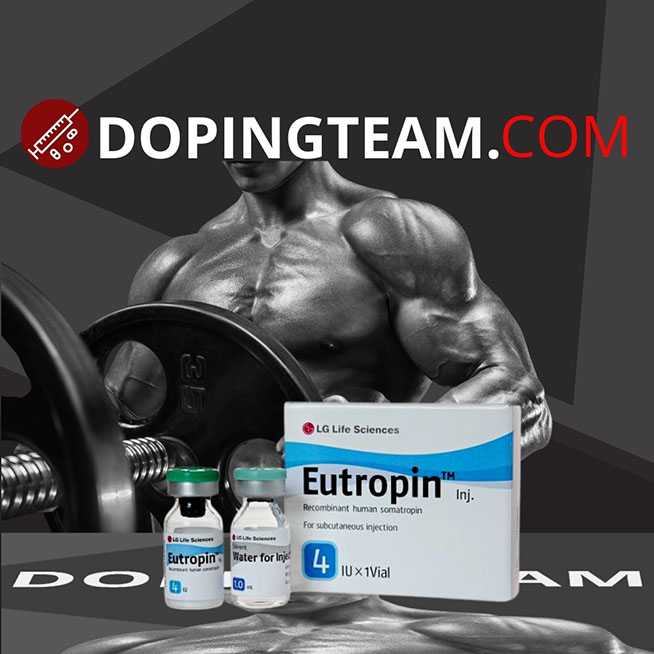 Once it is released, Eutropin LG 4IU (Human Growth Hormone or HGH pen), which is also called Human Growth Hormone (STH) has many functions in the human body. Human Growth Hormone is a protein that stimulates the body cells to increase both in size, as well as undergo more rapid cell division than usual. In addition, it enhances the movement of amino acids through cell membranes and also increases the rate at which these cells convert these molecules into proteins. Clearly, you can see that this would amount to an anabolic (muscle building) effect in the human body. Human Growth Hormone also has the ability to cause cells to decrease the normal rate at which they utilize carbohydrates, and simultaneously increase the rate at which they use fats.(1) Fat loss and lean mass increases with Human Growth Hormone have been found at a dose as low as . 0.028 iu/kg/daily for 24 weeks (4), however, in my estimation, that would be insufficient for a bodybuilder trying to gain muscle. Lets use .028iu/kg as a working number; that’s 2.8iu for a 100kg (220lbs) bodybuilder. That’s certainly not unreasonable, and I would say that that dose to 2x that dose is the range most bodybuilders and athletes are finding their best results with. Also, that length of time used in the study I just mentioned (24 weeks) is very typical of Human Growth Hormone use, and in conversations with my friends who have used this compound, have told me that they experience consistent results starting well after the 2-month-mark, and they tend to either run this stuff for 6 months at a time, or year-round (if they have sufficient funds). One of my friends is able to consistently retain a shredded 6-7% body fat all year round with the assistance of Human Growth Hormone, whether he is on steroids or off. He also has noted that his cardio (fast walking, for an hour a day) was much easier while on Eutropin LG 4IU than when off, and certainly the research Ive done would support his claim that sub maximal aerobic ability is improved with Human Growth Hormone use (5) (15).

Remember the negative feedback loop I always tell you about? Well, of course, your body has one which can stop the secretion of Human Growth Hormone, and it involves IGF. When your liver receives secretes IGF-1, it sends a message to both your Hypothalamus as well as your Pituitary to stop producing Human Growth Hormone. (1)

Most people who are taking the plunge into Human Growth Hormone use have reached a dead end with their use of anabolics, and need to push through that wall ((find oxandrolonefor sale)). I’m sure you’ve heard about the synergistic combination of using Human Growth Hormone along with Anabolic Steroids, IGF, insulin and T3 (* usually synthroid, a thyroid medication). The reason is that when these hormones are used correctly together, theyll produce a large amount of synergy, the insulin is able to shuttle nutrients into your muscle, the thyroid hormone increases your fat-burning capability, the IGF will cause muscle growth as well as helping to grow new cartilage (thus preventing injury), and the anabolic steroids like testosterone, specifically (in addition to being anabolic) can increase IGF-1, in muscle tissue(11), and maybe even increase your bodys ability to use it. Also, usually, an increased amount of IGF usually tells your body to stop producing Human Growth Hormone, but testosterone actually blunts this part of the Negative FeedBack Loop (12)! And the addition of an Aromatase Inhibitor will also stop conversion of testosterone into estrogen; estrogen reduces IGF levels.(13)(14) Finally, the Human Growth Hormone does, well everything I just spent the last few pages telling you about! get anadrol online

Be the first to review “Eutropin LG 4IU”