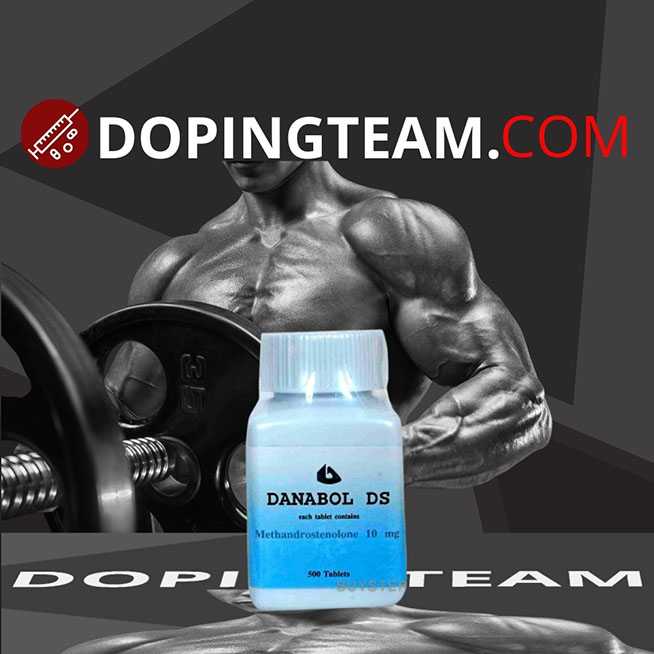 Methandienone (also known as Methandrostenolone, Danabol DS, Dbol, Dianabol) is an orally-effective anabolic steroid originally developed in Germany and released in the US in the early 1960s by Ciba Specialty Chemicals. This is a derivative from testosterone, one of the most popular steroid compounds in the world and the second steroid (after testosterone) ever produced. Methandienone promotes dramatic increases in protein synthesis, glycogenolysis, and muscle strength over a short space of time.  It also has the effect of decreasing the steroid’s affinity for sex hormone binding globulin. As a result, methandrostenolone is significantly more active than an equivalent quantity of testosterone, resulting in rapid growth of muscle tissue. However, the concomitant elevation in estrogen levels – a result of the aromatization of methandrostenolone – results in significant water retention. Hence, do not forget to perform blood works and use an aromatase inhibitor. In summary, this is a very good drug, and a potent tool for quick gains or retaining gains when used properly and safely.

You can get rapid effect in workouts after buying Danabol DS by credit card or via Paypal.

Enjoy buying Danabol DS from our steroid store. We are looking forward to make you our loyal customer.

Methandienone is a derivative of testosterone, exhibiting strong anabolic and moderate androgenic properties. This compound was first made available in 1960, and it quickly became the most favored and widely used anabolic steroid in all forms of athletics. This is likely due to the fact that it is both easy to use and extremely effective. In the U.S. Danabol DS production had meteoric history, exploding for quite some time, then quickly dropping out of sight. Many were nervous in the late 80’s when the last of the U.S. generics were removed from pharmacy shelves, the medical community finding no legitimate use for the drug anymore. But the fact that Dianabol has been off the U.S. market for over 10 years now has not cut its popularity. It remains the most commonly used black market oral steroid in the U.S. As long as there are countries manufacturing this steroid, it will probably remain so. Similar to testosterone and Anadrol 50, Methandienone (other known as Danabol DS) is a potent steroid, but also one which brings about noticeable side effects. For starters methandienone is quite estrogenic. Gynecomastia is often a concern during treatment, and may present itself quite early into a cycle (particularly when higher doses are used). At the same time water retention can become a pronounced problem, causing a notable loss of muscle definition as both subcutaneous water and fat build. Sensitive individuals may therefore want to keep the estrogen under control with the addition of an anti-estrogen such as Nolvadex and/or Proviron. The stronger drugs Arimidex, Femara, or Aromasin (antiaromatase) would be a better choice if available. In addition, androgenic side effects are common with this substance, and may include bouts of oily skin, acne and body/facial hair growth. Aggression may also be increased with a potent steroid such as this, so it would be wise not to let your disposition change for the worse during a cycle. With Danabol DS there is also the possibility of aggravating a male pattern baldness condition. Sensitive individuals may therefore wish to avoid this drug and opt for a milder anabolic such as Deca-Durabolin. While Danabol DS does convert to a more potent steroid via interaction with the 5-alpha reductase anzyme (the same enzyme responsible for converting testosterone to dihydrotestosterone), it has extremely little affinity to do so in the human body’s. The androgenic metabolite 5alpha dihydromethandrostenolone is therefore produced only in trace amounts at best. Therefore the use of Proscar/Propecia would serve no real purpose. Being moderately androgenic, Methandienone is really only a popular steroid with men. When used by women, strong virilization symptoms are of course a possible result. Some do however experiment with it, and find low doses (5mg) of this steroid extremely powerful for new muscle growth. Whenever taken, Methandienone (Danabol DS) will produce exceptional mass and strength gains. It’s effectiveness is often compared to other strong steroids like testosterone and Anadrol 50, and it is likewise a popular choice for bulking purposes. A daily dosage of 20-40mg is enough to give almost anybody dramatic results. Some do venture much higher in dosage, but this practice usually leads to a more profound incidence of side effects. It additionally combines well with a number of other steroids. It is noted to mix particularly well with the mild anabolic Deca-Durabolin. Together one can expect an exceptional muscle and strength gains, with side effects not much worse than one would expect from Danabol DS alone. For all out mass, a long acting testosterone ester like enanthate can be used. With the similarly high estrogenic/androgenic properties of this androgen, side effects may be extreme with such a combination however. Gains would be great as well, which usually makes such an endeavor worthwhile to the user. As discussed earlier, ancillary drugs can be added to reduce the side effects associated with this kind of cycle.

Be the first to review “Danabol DS 10”