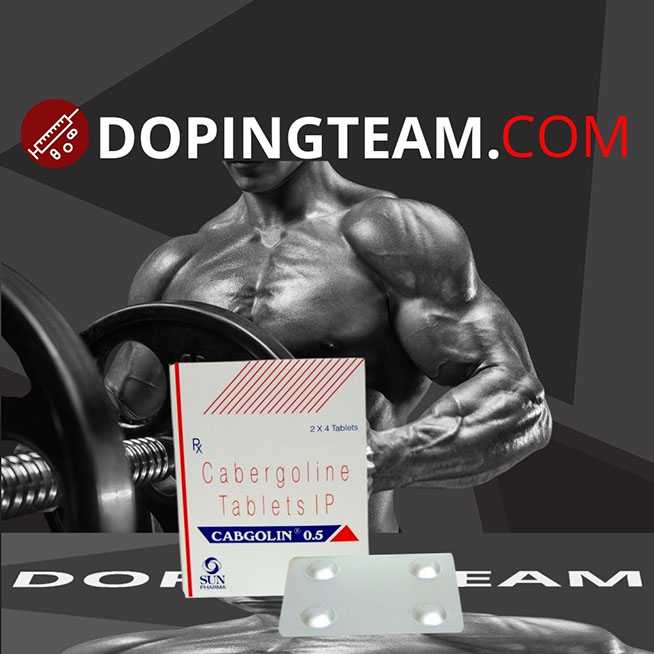 Description: Oblong flat cylindrical tablets white or almost white, with a facet on both sides and risk from one side. Pharmacotherapeutic group:Dopamine receptor agonist Pharmacodynamics:

Cabgolin 0.5 (Cabergoline) is a dopaminergic derivative of ergoline and is characterized by a pronounced and prolonged prolactin- lowering effect due to direct stimulation of the D 2 -dopamine receptors of lactotrophic pituitary cells. In addition, when taking higher doses as compared to doses to reduce the concentration of prolactin in the blood plasma, cabergoline has a central dopaminergic effect due to stimulation of D 2 receptors.

Reduction in the concentration of prolactin in the blood plasma is observed within 3 hours after taking the drug and persists for 7-28 days in healthy volunteers and patients with hyperprolactinemia and up to 14-21 days – in women in the postpartum period.

Cabgolin 0.5 (Cabergoline) has a strictly selective effect, does not affect the nasal secretion of other hormones of the pituitary and cortisol. Prolactin-lowering effect of the drug is dose-dependent, both in terms of severity and duration of action.

The pharmacodynamic effects of cabergoline, not related to the therapeutic effect, are only a reduction in blood pressure (BP). With a single admission of the drug, the maximum antihypertensive effect occurs within the first 6 hours and is dose-dependent.

Pharmacokinetics: Cabgolin 0.5  e quickly absorbed from the gastrointestinal tract (GIT). the maximum concentration in the plasma is achieved after 0.5-4 h, binding to plasma proteins is 41-42%. The half-life of cabergoline, estimated by the rate of excretion by the kidneys, is 63-68 hours in healthy volunteers and 79-115 hours in patients with hyperprolactinaemia. Due to the long half-life, the state of equilibrium concentration is reached after 4 weeks. After 10 days after taking the drug, about 18% and 72% of the dose are detected in urine and the proportion of unchanged drug in urine is 2-3%, respectively. The main product of cabergoline metabolism, identified in urine, is 6-allyl-8β-carboxy-ergoline at a concentration of up to 4-6% of the dose. The content in the urine of 3 additional metabolites does not exceed 3% of the accepted dose. It has been established that metabolic products have a significantly lower effect on the inhibition of prolactin secretion compared to Cabgolin 0.5. The intake of food does not affect the absorption and distribution of cabergoline.

– Prevention of physiological lactation after childbirth;

– Prolactin secreting adenomas of the pituitary gland (micro- and macro – prolactinomas); idiopathic hyperprolactinaemia; syndrome of the “empty” Turkish saddle in combination with hyperprolactinemia.

– Hypersensitivity to cabergoline or other components of the drug, as well as any ergot alkaloids.

– Dysfunction of the heart and respiration due to fibrotic changes in the lungs, pericardium, valvular or retroperitoneal space, or the presence of such conditions in the anamnesis.

– The risk of postpartum psychosis.

– The period of breastfeeding.

– Children under 16 years of age (safety and efficacy not established).

Like other ergot derivatives, Cabgolin 0.5 should be administered with caution under the following conditions and / or diseases:

– severe psychotic or cognitive impairment (including in anamnesis);

– severe hepatic insufficiency (use of lower doses is recommended);

– simultaneous use with drugs that have an antihypertensive effect (due to the risk of developing orthostatic hypotension).

Since no controlled clinical studies using cabergoline in pregnant women have been conducted, the use of the drug during pregnancy is only possible in cases of extreme need and a careful assessment of the relationship between the expected benefit and the possible risk to the woman and the fetus.

If the pregnancy occurred against the background of treatment with cabergoline, the drug should be discontinued immediately, also with a careful assessment of the ratio of the expected benefit to the possible risk to the woman and the fetus.

According to available data, the use of Cabgolin 0.5  in a dose of 0.5-2 mg per week, but for violations associated with hyperprolactinemia, was not accompanied by an increase in the frequency of miscarriages, premature births, multiple pregnancies and congenital malformations.

There is no information on excretion of the drug with breast milk, however, in the absence of the effect of cabergoline, mothers should avoid breastfeeding to prevent or suppress lactation. For violations related to hyperprolactinemia, cabergoline is contraindicated in patients planning breastfeeding.

Carrying out ancillary measures aimed at removing the non-sucking drug (gastric lavage) and, if necessary, maintaining blood pressure. Dopamine antagonists may be prescribed.

Information on the interaction of cabergoline and other ergot alkaloids is absent, so the simultaneous use of these drugs during prolonged therapy with cabergoline is not recommended.

Since cabergoline exerts a therapeutic effect by direct stimulation of dopamine receptors, it can not be administered concomitantly with drugs acting as dopamine antagonists (phenothiazines, butyrophenones, thioxanthenes, metoclopramide , etc.), as. they can weaken the action of cabergoline, aimed at reducing the concentration of prolactin.

Like other ergot derivatives, cabergoline should not be used concomitantly with antibiotic-macrolides (eg, erythromycin), because this can lead to an increase in the systemic bioavailability of cabergoline.

Before the appointment of Cabgolin 0.5 in order to treat violations associated with hyperprolactinemia, it is necessary to conduct a complete examination of the pituitary gland. In addition, an assessment of the state of the cardiovascular system, including echocardiography, should be conducted to identify abnormalities in valve function that occur asymptomatically.

As with other ergot derivatives, after prolonged administration of cabergoline, patients experienced pleural effusion / pleural fibrosis and valvulopathy. In some cases, patients received previous therapy with dopamine agonist agonists. Therefore, cabergoline Do not use in patients with existing signs and / or clinical symptoms of cardiac or respiratory function disorder associated with fibrotic changes or with such conditions in the anamnesis. It is necessary to cancel taking the drug in case of signs of appearance or deterioration of regurgitacin blood, narrowing of the lumen of the valves or thickening of valve flaps (see section “Contraindications”). It has been established that the rate of erythrocyte sedimentation increases with the development of pleural effusion or fibrosis. In the case of an unexplained increase in the rate of erythrocyte sedimentation, radiographic examination of the chest is recommended. In the diagnosis can also help study the concentration of creatinine in the blood plasma, the evaluation of renal function.

Be the first to review “Cabgolin 0.5”